Introduction
The Rapid Campaign Assessment Toolset (RCAT) was used to support the HQ 3 UK Div Ex IRON RESOLVE 14 (Ex IR 14) 30 Sep – 10 Oct 14. RCAT is an operational-level manual simulation designed for rapid set-up and execution that incorporates best practice from Course of Action (COA) Wargaming, Red Teaming and commercial off the shelf wargames. Mechanisms include options for stochastic and deterministic outcome resolution, but RCAT was primarily used during Ex IR 14 to provide a framework for, and prompts to, SME discussion. All RCAT mechanisms and results are transparent and can be moderated or adjudicated. The primary remit for the RCAT team was to provide the ‘soft’ and non-kinetic effects ‘wrap-around’ to the ABACUS computer simulation that would model movement and kinetic outcomes. However, RCAT went beyond that remit and became central to the exercise control process. References to ‘RCAT’ below can be taken as meaning any (good) manual simulation.

Integration of RCAT with ABACUS and EXONAUT

The broad processes required to integrate RCAT into Ex IR 14 are at Figure 1. The detailed processes specific to RCAT integration are broken out at Figure 2 and explained below. Note that the principle underpinning the entire process was that all kinetic combat outcomes and non-kinetic soft events were to be pre-considered at least 24 hours before they actually occurred, allowing the Game Controller (HQ 3 Div SO2 CT6) to shape the exercise to ensure Training Objectives (TOs) were met. The agreed outline events were then coordinated and enacted in real time the following day using the ABACUS computer simulation and EXONAUT events and injects management system. 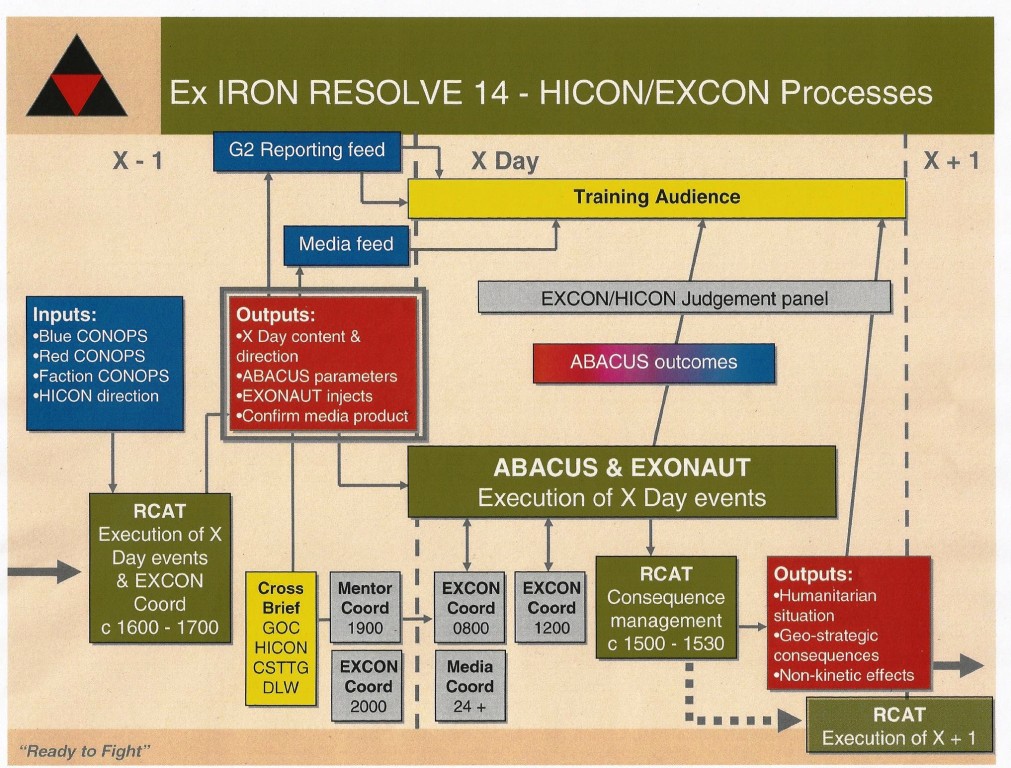 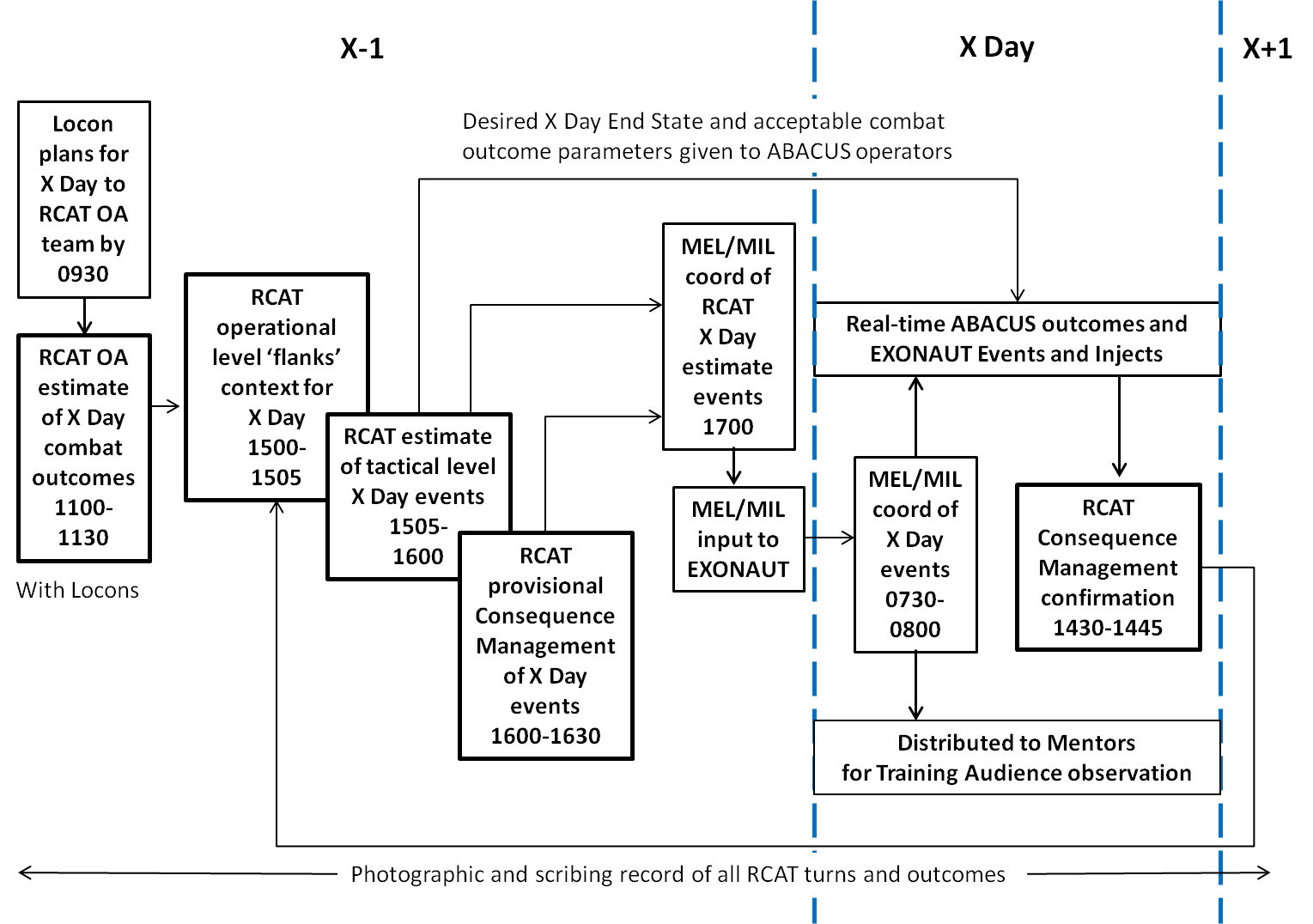 The key points pertaining to each sub-process are:

RCAT Operational Analysis (OA) estimate. The RCAT team provided a classic ‘support to operations’ OA function, based on the brigade-level Lower Controller (Locon) plans. These were discussed with the Locons and key Excon personnel (primarily the Game Controller, Chief MEL/MIL and Chief Hicon), who deterministically decided the spread of outcomes that best suited the exercise TOs. The key outcomes of the OA estimate, moderated by the Game Controller, were:

1. The desired End State for X Day that Locons were to try to achieve.

2. Parameters within which Locons should try to fight engagements using ABACUS in real time on X Day. Should casualties exceed these parameters, Locons notified the Game Controller before declaring results to the Training Audience (TA) to ensure the exercise X Day End State would not be compromised.

3. A pre-considered ‘OA outcomes’ brief of the above to be delivered during the primary RCAT estimate of X Day tactical activity. This enabled a much faster RCAT X Day estimate, as opposed to trying to determine OA outcomes during that actual event. 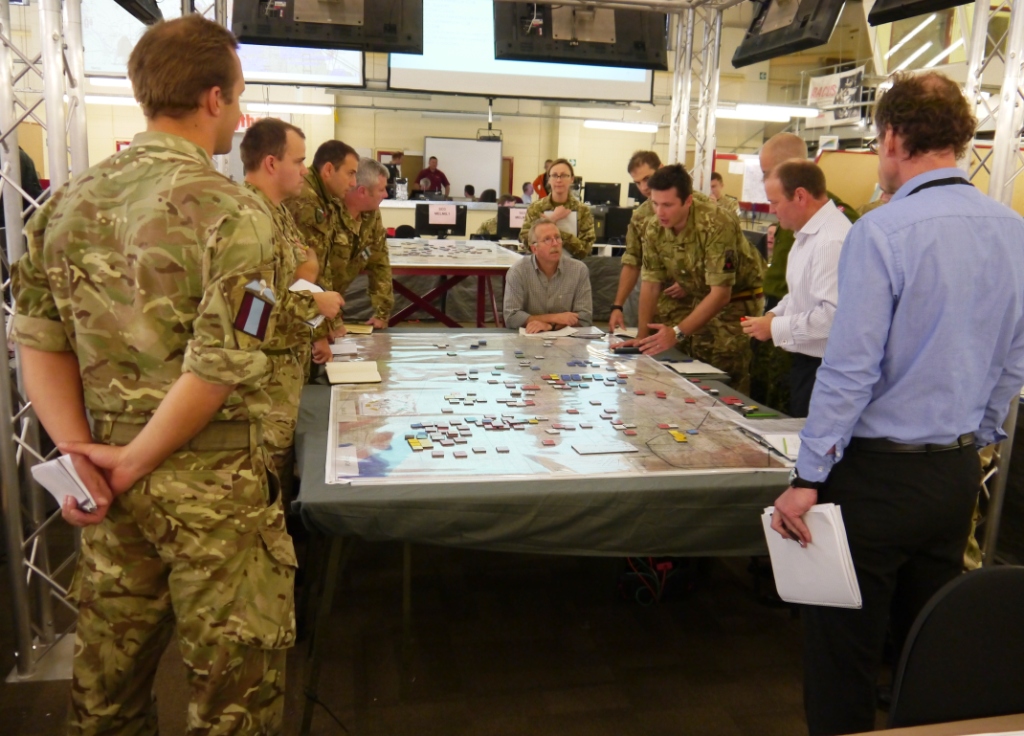 RCAT estimate of X Day events. This was the primary RCAT activity and took place in three distinct sub-turns: operational ‘flanks’ activity; tactical events; and a subsequent Consequence Management phase. The operational level Area of Operations-wide map allowed consideration of the flanks and wider picture in order to paint a rich context for divisional tactical-level operations at the detailed RCAT ‘bird table’. Both activities were based loosely on Course of Action (COA) Wargaming processes: Action-Reaction-Outcome Determination-Consequence Management.  Kinetic activity had been pre-considered during the OA estimate. All cells participated in the turn, which covered a 24 hour period. The RCAT turn order, which can be flexible, was: Blue (friendly forces) – Green (Host nation forces) – Red (conventional formed enemy) – Orange (Armed Non-State Actors) – Black (Organised Crime) – White (Humanitarian and other Human Terrain) – Grey (political and media). Key outputs were:

1. A rich ‘flanks’ context for the TA to operate within.

2. An estimate of the appropriate X Day events that would take the exercise towards the TOs, moderated and agreed by the Game Controller. 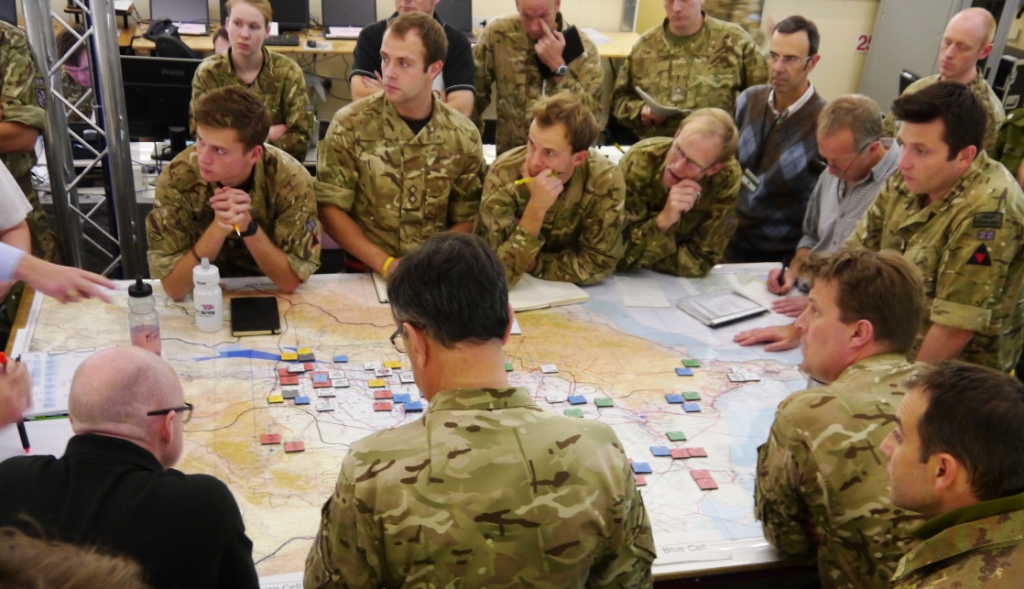 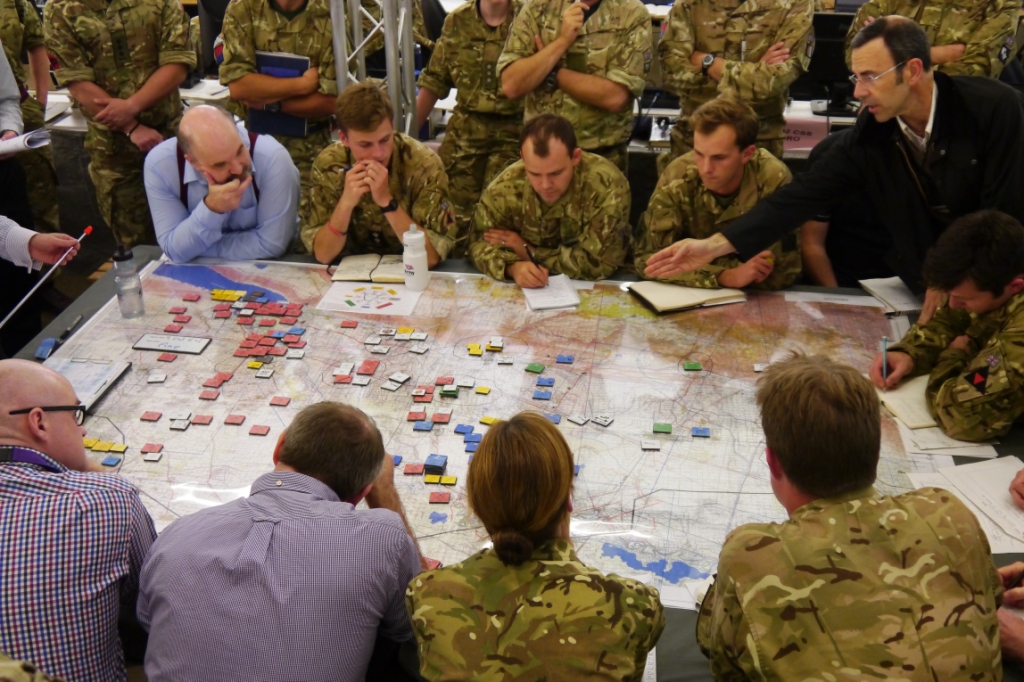 Provisional Consequence Management (CM) X Day estimates. CM asks the ‘so what’ questions of the anticipated X Day events to identify the 2nd- and 3rd-order effects of in-turn activities at the military-strategic level. These effects were noted as provisional on the RCAT CM map table using ‘interim’ markers. They were continually reviewed during the next day (X Day) and refined as required. The CM process provided the majority of Commander’s Assessment Update (CUA) material and the points most likely to affect the TA commander (GOC 3 UK Div) at the military-strategic level. 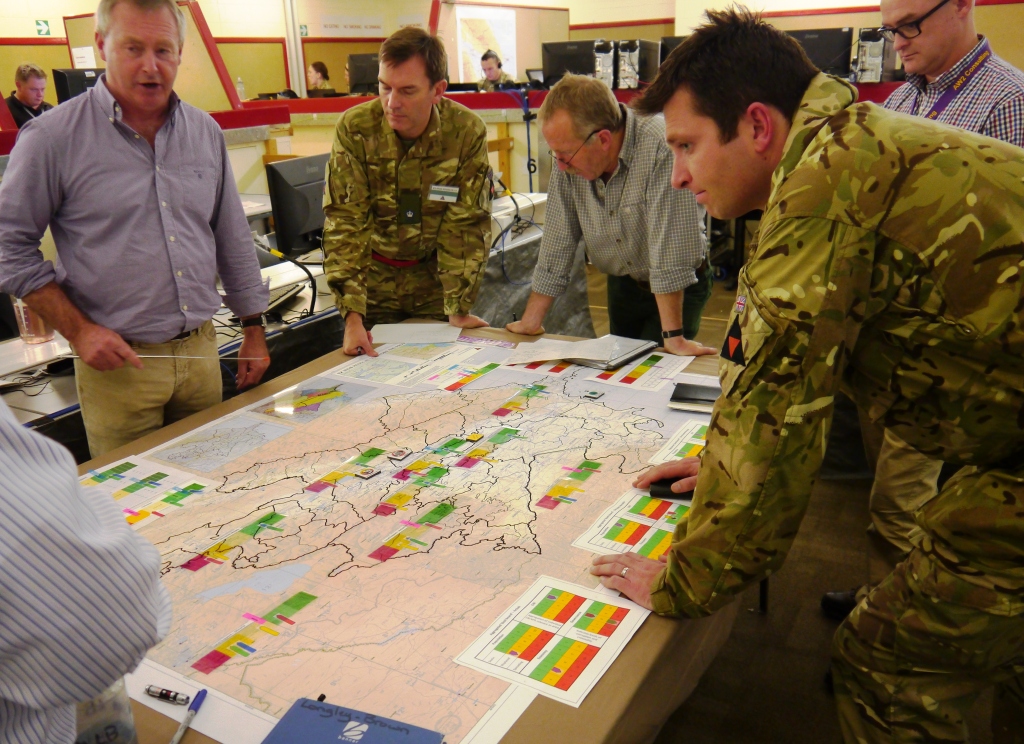 EXONAUT scripting. The agreed and coordinated MEL/MIL serials were then scripted into the EXONAUT management system. EXONAUT prompts Locons and cells when to actually inject each serial.

MEL/MIL Coordinating Conference (X Day 0730 hours). Serials for the forthcoming day were confirmed, having been scripted the evening before. EXONAUT then automatically sends a ‘Task, Condition and Standard’ statement to the Mentors who observe serials being played out in real time by the TA during X Day. Although based on the RCAT estimate from the previous day, the predicted events proved sufficiently accurate to provide the basis for serials with only occasional and minor refinement at the point of injection.

X Day ABACUS simulation. ABACUS is a real-time computer simulation that was used for movement and to resolve kinetic combat activity. It does not model, but can represent, non-kinetic activity. For example, refugee flows were determined during the RCAT estimate and an icon placed in ABACUS that would show on the TA Common Operations Picture (COP). Locons would ‘fight’ ABACUS in line with the agreed RCAT estimate OA outcomes. Where these differed markedly, the Locon would inform the Game Controller who would adjudicate the results or allow them to stand (but understanding the effects of this in the anticipated End State). Hence RCAT was used to shape ABACUS outcomes, but not dictate them.

RCAT CM confirmation. At about X Day 1430 the provisional CM ‘interim’ movements estimated the day before were reviewed, refined if necessary, and then confirmed. These provided:

1. The initial brief for the following RCAT operational level context event; and

Recording. SO2 Excon Coord provided the scribe function for all RCAT turns and events and, from these, produced the key MEL/MIL agenda that enabled population of EXONAUT. A separate photo record was taken of all RCAT turn start and end positions.

The principal remit of the RCAT team was to provide the non-kinetic ‘wrap-around’ context and game play for the ABACUS-delivered Ex IR 14 kinetic events. RCAT went beyond this by providing or enabling the capabilities listed below:

Adversarial and oppositional game play. The RCAT process demands that all cells play the represented factions and actors in an adversarial manner. Where appropriate, oppositional factors are introduced e.g. Clausewitzian ‘friction’.

Dynamic and imaginative scenario development. While pre-scripting major events and injects can sometimes work well, the RCAT method of dynamically determining the scenario story-line adds significant depth and richness to the context. Key TOs are ‘way points’ along the dynamic route delivered by RCAT. Most major Ex IR 14 events arose from unforeseen free-play actions e.g. the key ‘state within a state’ situation arose from the Orange Cell taking advantage of Red abandoning a city and then operating using a combination of ISIS and Hezbollah tactics. Figure 6 shows examples of products developed to support and visualise this story line in one province and city.

Military-strategic consequences. The RCAT CM phase translated tactical actions taken by the TA into operational- and strategic-level ramifications. These formed the basis of most days’ CUA.  Three of the four final CUA bullets were derived from dynamic RCAT mechanisms: the ‘state within a state’; an Internally Displaced Persons camp in close proximity to a kinetic engagement; and Collateral Damage to a major oil pipeline.

The ability to pre-consider events 24 hours in advance and thereby shape the exercise to best achieve the TOs. The RCAT ‘estimates’ proved sufficiently accurate to allow the Game Controller to adjust game play and identify and carefully monitor real-time outcomes that might have adversely affected the exercise.

ABACUS parameters provided by RCAT OA estimates. The 1100 RCAT OA meeting with the Game Controller, Chief Hicon and Locons enabled an informed discussion of likely combat results 24 hours before they occurred. This provided an agreed End State that Locons and ABACUS operators were to try to achieve and casualty parameters to work within. All were flexible, and Locon Mission Command was enabled. However, if a casualty parameter was breached, the Locon informed the Game Controller. He could then moderate results or allow them to go ahead in the full knowledge of how this might affect the End State and achievement of the TOs.

Fun. RCAT is fun. Wargaming and manual simulations are fun. There should be no embarrassment in making this statement. Fun equals engagement equals more work (work is fun, too!), and hence a better and deeper context provided by Excon.

Issues arising from the use of RCAT

No issues arose using RCAT that were not quickly resolved during the exercise by making minor modifications to the process and timings. The concern that RCAT was unproven and an unknown quantity was quickly laid to rest. The only – unfounded – potential issue that had not been comprehensively addressed by Endex was the possible discrepancy between RCAT OA estimates and ABACUS outcomes. Although the RCAT team was confident throughout that RCAT and ABACUS outcomes would be broadly similar, quantitative analysis was not available during the exercise to prove this. Subsequent analysis showed that the RCAT and ABACUS outcomes were close enough to satisfy the exercise requirement.

Recommendations for the future use of manual simulations

Manual sims could be used to support future exercises in a number of ways:

1. MEL/MIL EXONAUT scripting week. A two- to three-hour facilitated play-through of the likely scenario(s) would enable MEL/MIL scripters to gain rapid situational awareness of the geography, ORBATs and likely ‘shape’ of the overall exercise. Armed with this understanding of the exercise context they could better prepare EXONAUT injects.

2. Exercise design. A good manual simulation enables consideration during exercise design of aspects such as balance of forces and the identification of key factors, factions and actors to be played into the exercise.

3. Execution. Little preparation is required to use manual sims to support brigade- and divisional-level exercises. The processes described above provide the starting point for future events.

None of the above recommendations imply that a manual simulation can deliver an event like Ex IR 14 without an exercise management system such as EXONAUT (or the NATO JEMS) or a computer simulation such as ABACUS (or any of the many alternatives). An entirely complementary approach is required. For example, EXONAUT provided the detailed injects management, recording and distribution to mentors functions, while ABACUS delivered combat outcomes, movement, logistic ‘bean counting’ and a distributed COP; manual simulations do little of this.

← Back to Case Studies index

Comprehensive write up. This is one of the few analytical attempts I have seen that goes beyond the superficial. However, I am not convinced combat outcomes require excessive modelling to approximate the real world. Thank you for writing this up.

Very interesting report, Graham—and a very useful case study of how a manual wargame can be integrated into (and even help drive) a broader process that includes both computerized information support and some computer-based outcome determination.