These comments are an adjunct to David England’s excellent presentation to Connections UK 2015 on the UK Army’s Light Role Battlegroup Experiment, conducted on behalf of Capability Directorate Combat by Niteworks. As David explained, wargaming enabled by manual simulation was central to his Analysis and Experiment (A&E) approach. Because the experiment focussed on battlegroups we could model aggregated force elements (FEs), usually representing these at sub-unit (company/squadron) level or, occasionally, as platoons/troops. Hence the supporting Operational Analysis (OA) was predicated on aggregated modelling, generally using force ratios to inform military judgement with respect to likely combat outcomes. This ‘big handful’ approach was also applied to terrain; while we took account of broad ranges, rates of advance, terrain types etc, we did not get into detailed Line of Sight (LOS), individual weapon ranges and so forth.
That worked fine, as David explained at Connections UK. But I was wary of a level of tactical detail at which an aggregated approach in a manual simulation would be unlikely to remain fit for purpose: when you have to consider individual platforms’ capabilities, single shot kill probability (SSKP), micro-terrain etc. Hence I introduced an ‘aggregated vs tactical weeds modelling line’ into the planning discussions, below which we should not stray. Aggregation works if you are modelling above this line, but not if you are working below it in the ‘tactical weeds’ of SSKPs, LOS etc. This is a significant distinction.
.
We didn’t need to drop below the line in David’s project. However, a subsequent experiment concerned generating the Concept of Employment (CONEMP) for the UK’s new SCOUT reconnaissance vehicle. This vehicle does not yet exist; everything is theoretical. Wargaming supported by manual simulation was again adopted in the preliminary stages of the experiment as a precursor activity for A&E activities supported by constructive, virtual and live computer simulations. The manual simulation-supported wargame was itself preceded by Military Judgement Panels (MJPs) and simple MAPEXes. The progression is shown in one of David’s diagrams, below.
. 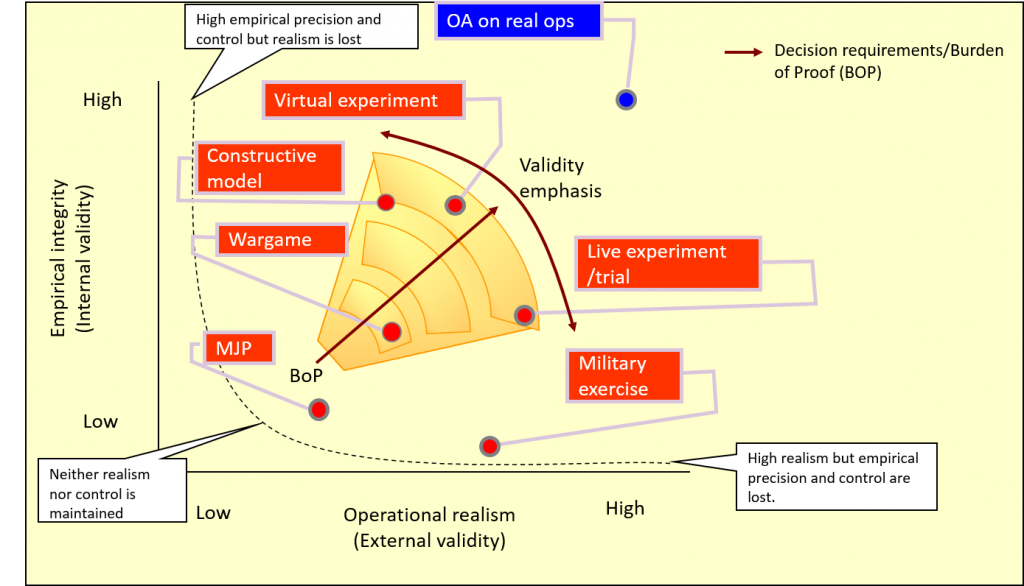 Experiment Design Space, courtesy of Niteworks
.
No question this time that we were working below the ‘aggregated vs tactical weeds modelling line’: our SMEs were C Sqn of the Royal Lancers (RL), and we would be working with the Officer Commanding, 2ic, Troop Commanders and sergeants through to the gunners in individual vehicles. The RL (and other Army recce units) dismounted recce capability is generally provided by 4-man OPs and the RL are also expected to dismount and operate as conventional infantry in 4-man fire teams. Hence our basic FEs were individual vehicle platforms and 4-man fire teams, often operating crew-served weapons such as the Javelin ATGW.
.
I was again initially concerned that manual simulation would not provide the fidelity to work in the ‘tactical weeds’ space – a view echoed by Tom Mouat at the Connections UK 2015 ‘101’ who, quite rightly, questioned the ability of manual sims to cope with, by way of example, determination of detailed LOS from a map. Three months ago and I would have agreed, but we got on and developed a manual sim approach designed for use below the aggregated modelling line – and it worked! Aspects you might find interesting/of use are discussed below.
.
Design approach. This was:
.
.
Deconstructed computer simulation. The fundamental approach we adopted was that of a ‘deconstructed computer sim’, be that constructive or virtual. In common with most computer sims that model at the platform level, we determined the percentage chance (p) of: detect; hit; then kill (more precisely, effect). We based these on the User Requirement Document (URD) plus manufacturer’s data where possible, and interpolated (filling in the gaps between known data points) and extrapolated (estimating beyond the known data range) using SME judgement. I refer to this as ‘URD (+)’ hereafter. We derived a series of tables for every vehicle and FE type in the scenario, correlating these against every opposing vehicle and FE type at various ranges, in different terrain types and with various positive or negative modifiers; a serious and lengthy undertaking even with just three or four vehicle types per side. We then presented these URD (+) figures transparently to the C Sqn RL SMEs during the wargame for their comments. This both enabled the wargame and identified important areas for subsequent examination. The detailed process was:
. 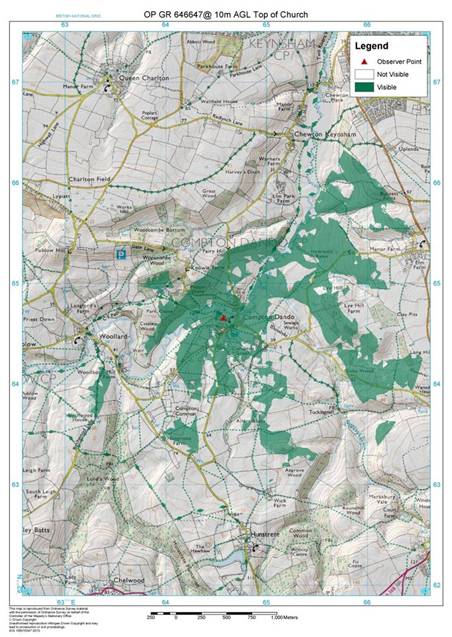 Intervisibility study used to augment map-based LOS determination
.
Wargaming as scoping activity. As alluded to above, many of the wargame outputs highlighted areas for subsequent investigation during the virtual and/or live trials phase of the experiment. A dozen or so people wargaming for a couple of days in the early stages of an experiment provides focus for subsequent activities and saves significant resources downstream in the – far more expensive – constructive, virtual and live simulation phases.
.
Combining manual simulation with other methods. Although I said earlier that using force ratios below the ‘aggregated modelling line’ can be problematic, we still used the technique in a complementary approach. The RL also use force ratios in their planning, so we thought it sensible to do likewise. The three illustrations below show: an expanded 1:25,000 map and counters, each with a combat factor noted on it; a quick white-board calculation of force ratios for a raid; and the preceding Close Target Reconnaissance (CTR), examined using a variation of matrix gaming. Note on the white board photo that factors shown in brackets were used only for comparative purposes against other platforms and form no part of the final calculation. 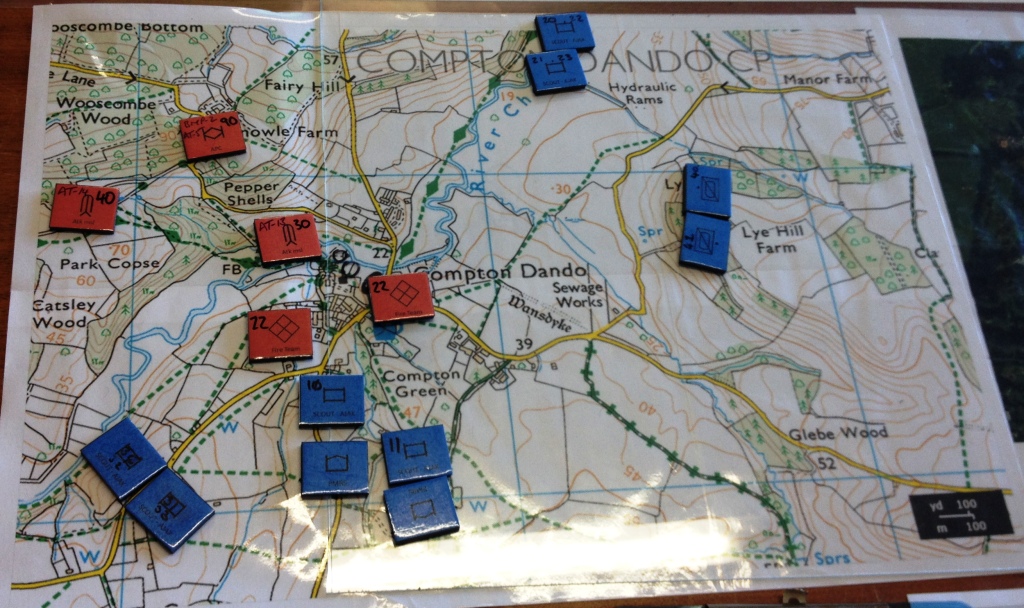 Expanded 1:25,000 map and counters showing detail of a raid 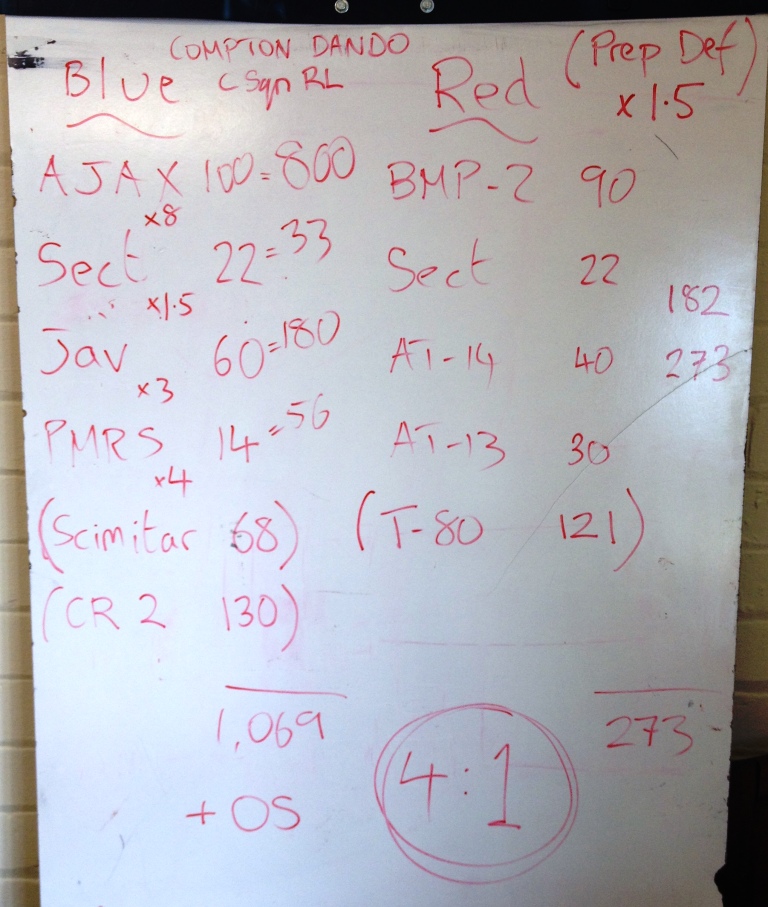 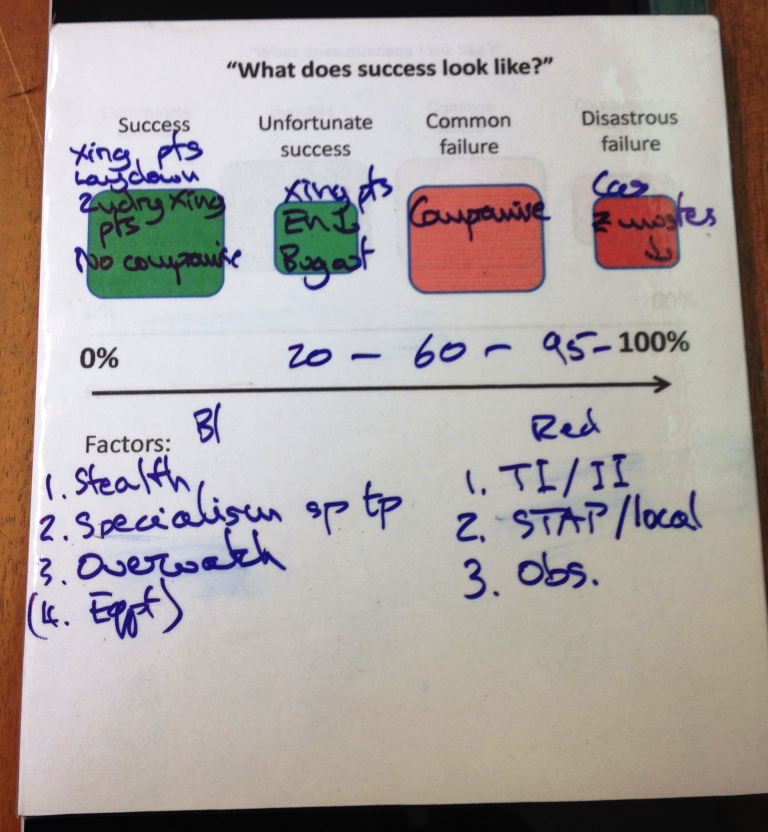 ‘4-box method’ derived from matrix gaming techniques, in this instance examining the factors leading to the success (or not) of a CTR
.
Informing military judgement. All of the above methods do no more than prompt discussion and help inform military judgement, in this case the C Sqn RL SMEs. It is their views that the wargame was designed to elicit, and a dedicated scribe noted their observations, insights and lessons identified. As discussed, many of these were carried forward into, and provided focus for, subsequent phases of the experiment.
.
Transparency and Red Teaming. All calculations, determinations and adjudications were conducted entirely transparently so that everyone understood all data and assumptions. Furthermore, the SMEs were requested to challenge any and all assumptions, even – especially – their own. This Red Teaming played a key role in identifying aspects of the CONEMP that needed further examination.
.
Lessons identified
.
A number of lessons identified are worth re-emphasising:
.
← Back to Blog index

This sounds like a very interesting and exciting approach. It occurs to me that it would be possible to validate the approach by a retrospective look at a previous ‘known quantity’ weapon system (if you’ve not already done that). This validation would give greater confidence in the method and would help if presenting it to sceptical professionals.

As an aside, map-based LOS determination is possibly poorer in ostensibly flat terrain. A contour line in this type of terrain can be very misleading. Example from Normandy 1944: Canadian 9 Brigade’s “position” on a slight rise between Authie and Buron – the rise did not exist, even though the contour did. Using Google maps it’s a matter of only a few minutes to confirm, as opposed to actually going there! This makes traversing some parts of some combat zones really easy, and it might also complement your LOS by map reading and aerial photos (unless of course you already used street view?). You get a much better view by zooming in to street level.